Lorenz (Laurent) Fries was born in Alsace in 1490 or thereabouts, describing himself on one occasion as from Colmar, one of the towns of the region.  He studied medicine at university, or rather at universities, as he seems to have had a peripatetic education, apparently spending time at the universities of Pavia, Piacenza, Montpellier and Vienna (1).

Having successfully completed his education, Fries established himself as a physician, at a succession of places in the Alsace region, with a short spell in Switzerland, before settling in Strasbourg, in about 1519.

By this time, he had established a reputation as a writer on medical topics, with several publications already to his credit.  Indeed, it was thus that Fries met the Strasbourg printer and publisher Johann Grüninger, an associate of the St. Die group of scholars formed by, among others, Walter Lud, Martin Ringmann and Martin Waldseemuller. Grüninger.  It would seem that Gruninger was responsible for printing several of the maps prepared by Waldseemuller, and for supervising the cutting of the maps for the 1513 edition of Ptolemy, edited by the group.

This meeting was to introduce a important digression into Fries’ life, and for the next five years, from about 1520 to about 1525, he worked in some capacity as a cartographic editor for or with Gruninger, exploiting the corpus of material that Waldseemuller had created.  Unfortunately, there is little evidence to help gauge the nature of the relationship.

Fries’ first venture into mapmaking was in 1520, for that is the date found on a map of the World, bearing his monogram.  However, Fries’ role is uncertain.  The map was a reduction of Martin Waldseemuller’s wall-map of the World, published in 1507.  While it would appear that Fries was the editor of the map, credit is actually given in the title to Peter Apian.  There is no evidence that Fries was a woodcutter, which might have offered an alternative explanation for the appearance of his monogram..  The two other monograms that appear are of Johann Camers, editor of the book containing the map, and of Luca Alantse, the publisher.

The map is entitled ‘Tipus Orbis Universalis Iuxta Ptolomei Cosmographi Traditionem Et Americ Vespucii Aliorque Lustrationes A Petro Apiano Leysnico Elucubrat. An.o Dni MDXX‘, and was issued in Caius Julius Solinus’ Enarrationes, edited by Camers, and published in Vienna in 1520 (2).  In view of Fries’ connection with Gruninger, it seems likely that the map was cut in Grüninger’s workshop.

The major project that Fries and Gruninger worked on was a new edition of the Geographia of Claudius Ptolemy, which was published by Johann Koberger in 1522.  Here again, Fries evidently edited the maps, in most cases simply producing a reduction of the equivalent map from the 1513 edition of the Geographie Opus Novissima, printed by Johann Schott.  Fries also prepare three new maps for the Geographie: maps of South-East Asia and the East Indies, China and the World, but the geography of these derives from Waldseemuller’s world map of 1507.

Karrow noted “Grüninger had high hopes for this edition, one of the grandest products of his press in a period when it was not known for producing grand books. The edition suffered, however, from a great many textual errors … Nevertheless, the book sold well enough to justify a new edition three years later…” (3)

In fact, the comparative rarity of the 1522 edition would actually seem to suggest the opposite – that the edition was not well received, and that sales were poor.  For example, A.E Nordenskiold, who attempted to collect examples of each edition of Ptolemy’s text illustrated with maps, was not able to secure an example of this edition for his collection (in spite of his willingness to buy defective examples of volumes that he sought).

Instead, it would appear that Grüninger sought to recoup his investment by preparing an improved edition, and to this end, he sought the assistance of Wilibald Pirkheimer to re-edit the text, using the notes of Johannes Regiomontanus.  The new edition was ready in 1525. As Karrow notes, the press-work was not of a high standard, and Pirckheimer was generally dissatisfied with the finished book (4)

After Grüninger’s death in 1531, the business was continued by his son Christoph, who seems to have sold the materials for the Ptolemy to two Lyons publishers, the brothers Melchior and Gaspar Trechsel, who published a joint edition in 1535, before Gaspar Trechsel published an edition in his own right in 1541.

These two editions were edited by Michael Servetus (or Villanovus), a Spanish doctor resident in Lyons.  In those difficult times, Servetus was accused of heresy.  One piece of evidence used against him was a passage on the reverse of the modern map of the Holy Land, which said that “Palestine was not such a fertile land as was generally believed, since modern travellers reported it barren” (5).  Unfortunately, this not Servetus’ original view, but was a passage repeated from the 1522 edition.

This charge seems to have counted against Servetus for, when he was burnt at the stake, Calvin ordered that copies of the book should be burnt with him.  This has often been cited as a justification to describe examples of the 1535 and 1541 editions as the rarest of the four.  However, it should be remembered that Servetus was executed in 1553, twelve years after publication of the final edition, so images of the entire print-run being destroyed are exaggerated.   In fact, the 1535 and 1541 editions are the two editions most commonly encountered, both in libraries and on the market, which would suggest the Calvinist authorities may only have burnt a few token copies.

Having completed the 1522 edition of Ptolemy, Fries turned his attention to the last of Waldseemuller’s great cartographic works, his wall-map of the world, published in 1516.  Once again, Fries worked on preparing a reduction of that map, although his copy is only slightly smaller than the original.  Fries’ version was apparently ready in 1525, but no example of that first printing is known today, although fragments are to be found at Leiden University Library (6).

A complete example of a 1530 printing, bearing the imprint ‘Carta Marina Universalis Emendata Et Veritati Resauarat Laurentio Frisio Anno 1530′ is to be found in the Bayerische Staatsbibliotek, Munich (7), while a 1531 printing, issued by Grüninger’s son, Christoph, has been more recently publicised (8).

To accompany the map, Fries prepared a booklet Uslegung der Mercarthen oder Carta Marina…, of which the earliest example known is dated 1525 (9).  The existence of other editions, dated 1527 and 1530, may imply parallel editions of the map, which are unknown today.

In 1525, Fries was forced to leave Metz.  It would seem likely, as his known output is so derivative of Waldseemuller, that the arrangement with Grüninger had reached a natural conclusion.  During the five years, Fries had exhausted the existing body of Waldseemuller’s works, having issued copies of three of them, while the original blocks of the fourth, the map of Europe from 1511, were still available to Grüninger.

For whatever reason, his departure marks the end of his cartographic work, and he again turned to writing medical text books, which occupied him until his death in 1531 or 1532.

References.
(1) Karrow, Robert W. Jr. Mapmakers of the Sixteenth Century and Their Maps (Chicago: Speculum Orbis Press, 1993) gives an account of Fries life, and publications, with references to further reading. 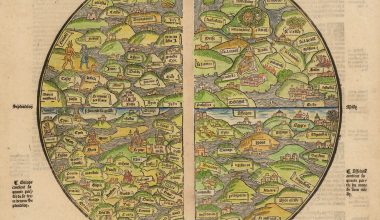 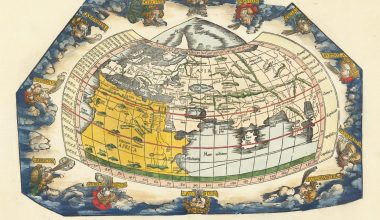 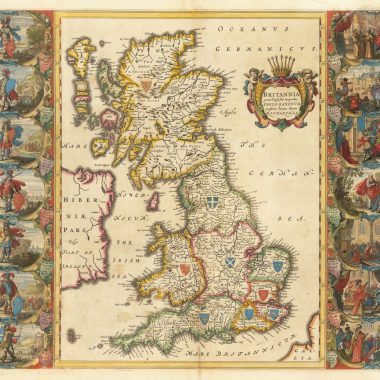 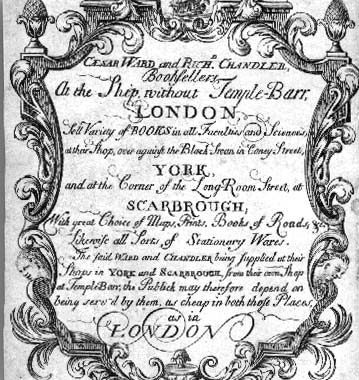 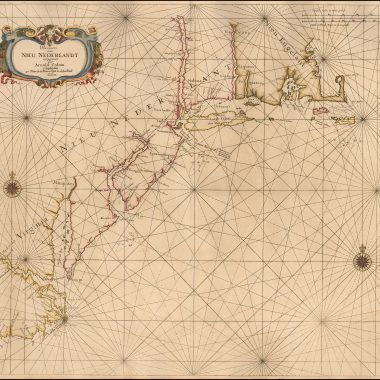 Referring to the Zee Atlas, Koeman wrote: “This chartbook by Arnold Colom … is one of the most important… 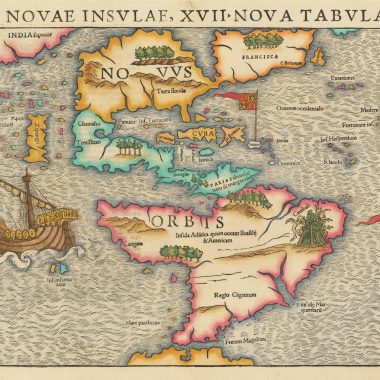 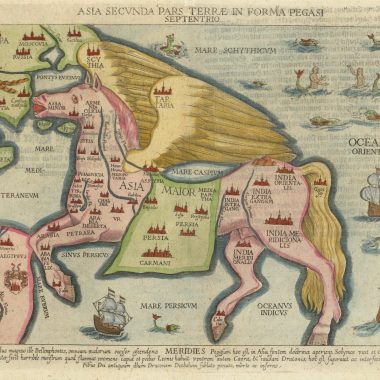 One of the most unusual works relating to the Bible was composed by Heinrich Bunting, and first published… 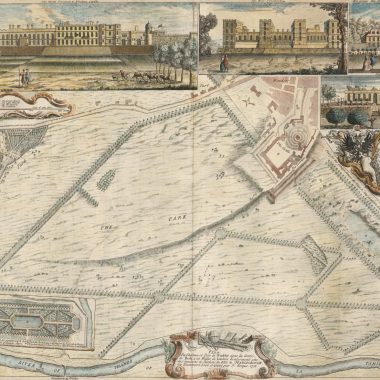